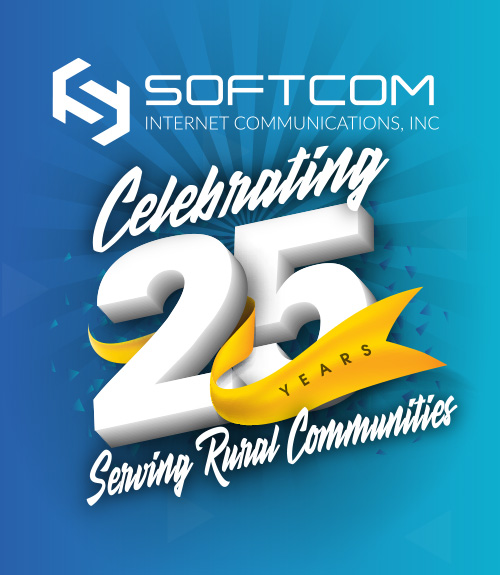 This year has definitely been one for the books – and we’re not done yet! Our 25th anniversary is this year and we’re pretty excited about what we’ve accomplished – and planning for even more. We’ve rounded up some fun facts you may not know about us, and a few sneak peeks into the future. And up front, we’ve just got to say, thank you! Throughout all we do, it’s customers like you who make is all worth it. We’re truly grateful for your trust and loyalty and look forward to many more years to come.

In the early ‘90s, two old college buddies sat in a poorly-lit garage. Both with serious business and tech skills, both with a vision for providing much-needed technology services and support in the rural area they’d grown up in. In 1992, Kevin Triplett (President and CEO) and Scott Martin (Senior VP) began this company providing computer networking and application development consulting. In 1994, Softcom became an Internet service provider, providing dial-up Internet service and domain hosting to residential and business customers throughout California, Nevada & Utah.

The Death of Dial-up

After the Internet Boom of the 1990’s, the Bust that followed gobbled up a lot of small ISPs as the dust settled from the tech crash and dial-up gave up the ghost. Softcom was able to navigate the storm by acting quickly, and making the right decisions for their next steps as they adapted new technologies and predicted the needs of their community when it came to accessing the internet.

A few years later, when an 18-year-old customer walked into the Softcom offices and saved the day by helping a technician solve a customer issue, we hired him on the spot. Brian Meredith moved on to become Softcom’s CTO in the early 2000’s and an integral part of the company’s ability to stay ahead of the curve.

Not Afraid to Fail

“In the beginning during the dial-up days, and even somewhat during our transition to becoming a wireless internet provider, we had no blueprint to go by to create our internet business. Very few mentors to lean on or industry professionals to glean knowledge from. Things were so new that we were truly on the bleeding edge of technology and had to learn by trial and error. We couldn’t lean on others who had blazed the trail before us because, to some extent, we were the trailblazers. Not having access to information that could solve many of the serious problems we’d eventually face, we had to accept the fact that failure was a normal part of doing business. And fortunately, we’ve never been afraid to fail, sometimes badly. It’s my opinion that our willingness to fail and ability to learn from those failures has played a key role in our success. In the past 25 years, we’ve been actively involved in one of the greatest technological advancements in modern history. Having been here at Softcom since the beginning, I’m proud of our success because I know how difficult it has been, how hard we have worked, and the value we continue to provide our customers. It’s been a crazy adventure, I’m thankful to everyone involved along the way who has helped to make Softcom a success.”

As technology progressed, we’re committed to keeping up by continually expanding, improving, upgrading and offering cutting-edge technology backed by the same great customer support our customers are used to. In fact, we recently expanded our customer service staff, extended their hours, and hired additional field techs – all to give you the best service we can and offer the best internet service in the area.

“This is really exciting for us. We’ve been able to create and build a company where employees enjoy working. Provide services our customers enjoy using. And a community who supports us every step of the way. Without all of that, we wouldn’t be where we are today.”

Expansion and improvement is a constant at Softcom for everything from technology to pricing to customer service. To date we have upgraded 5 towers with 4G LTE, with two more planned to be in service by the end of this year. Understanding our customers’ desire for freedom from traditional rural internet and cable television restrictions, we’re continually increasing our ability to provide high-speed internet to rural areas, while also establishing direct connections to Netflix and other popular streaming services to make sure you get the best possible streaming experience.

“We’ve seen such a rapid increase in bandwidth consumption due to streaming, video chats, gaming and more, and those numbers just keep going up. The amount of bandwidth we’ve had to bring to our customers is like nothing I ever imagined when we first started – it’s mind-boggling how far we’ve come. As the industry advances, we’re dedicated to upgrading or adding proven technologies so that our customers get the connections and service they deserve, even those in rural areas who traditionally had very little options.”

Committed to our Community

While other ISPs try to save money by outsourcing support operations overseas, we won’t do that. No overseas call centers – all our employees live here in the Sacramento area and work out of our Galt facility. Whether you call us, drop by the offices, or are visited by our techs on-site, you’ll work with people who know you and know the community. Today, tomorrow and into the future, we remain focused on our commitment to provide you the best service at the best price for the high-speed internet you deserve.

How to choose the best router for Softcom service

One frequent question we often hear from new clients is how to choose the best router for their needs. When setting up new accounts for high-speed internet access, choosing the right router for your home or place of business is an important step, so we’ve rounded up a few guidelines to help your decision. When

How do I set up service with Softcom

If you’re new to the area, or new to Softcom, and wonder what it takes to get set up for high-speed internet access here in the San Joaquin Valley area, here’s what you need to know. Softcom currently provides internet service to the following cities: Acampo, Clements, Collierville, Courtland, East Stockton, Elk Grove, Galt, Herald,

What a year! Looking back, we see a year filled with drama, excitement, and accomplishments that made everyone’s life a little bit easier and a whole lot happier. Here’s a round-up of our best of 2019, we hope you feel the same way too! Education & Entertainment Connect, learn and grow is the theme for

We believe that everyone deserves fast, reliable internet service no matter where they live or work. Softcom brings the experience, infrastructure, and technology to stand behind our vision. And we’re laser-focused on giving our customers the fast connections, exceptional customer service, and simple, affordable pricing they deserve.

For more information, visit our About Page.